This was my first trip to Moab.

While I’ve explored plenty of remote trails and tracks in the Pacific Northwest, the landscape surrounding Moab is much different than what we’re used to in Oregon. Everything is so relentlessly red and the epic rock formations are like something straight out of Red Dead Redemption. We arrived at the tail end of winter, so the remaining snow and resulting bands of green provided a really interesting contrast and visual interest to our trip. It was definitely everything we expected.

The main mission of the trip was to donate face masks to families and elders in need on the Navajo nation, but as we were passing Moab on our way home, we decided to take a bit of time (we had a 24-hour window) to explore the area. Our photographer Rene was along for the ride in my 2006 LR3, while Thayer Low joined us in her 2012 LR4. Thayer is a Land Rover aficionado out of Colorado who has competed in the Rebelle Rally and knows the Moab area well. Having her there really helped instill the confidence and freedom to blast down trails that we otherwise may have been timid about tackling as first-timers.

As it was winter, some snow and ice remained on the north-facing slopes. This meant we had to be particular with the trails we chose. Despite this, hitting the usually busy OHV area during the off-season was worth it. It was a really different experience, and the lack of crowds allowed us to cover quite a bit of ground in a short time period.

Again, I was really impressed with the Land Rover Discovery platform. Even without a super built-up rig, the network of trails surrounding Moab are fairly accessible. My relatively stock LR3 was able to do a lot, and really shined during the fast sections.

Here are the four trails we chose to complete near Moab, with a one-day window to play.

We arrived in Moab late in the day, so we chose this trail knowing we had a few hours for photos and to see a good cross-section of track. Although the Shafer Trail wasn’t necessarily difficult (we passed a stock Cherokee and BMW X3), it was a really great introduction to the area without digging too deep into the trail system.

Due to the presence of a nearby active Potash mine, the paved road leading to the Shafer Trail (and the trail itself) is sometimes referred to as Potash Road. The deep blue of the potash evaporation ponds contrasts dramatically with the surrounding red rock. Once past the ponds, you’re immediately greeted with iconic red rock formations and some easy slickrock steps to climb. 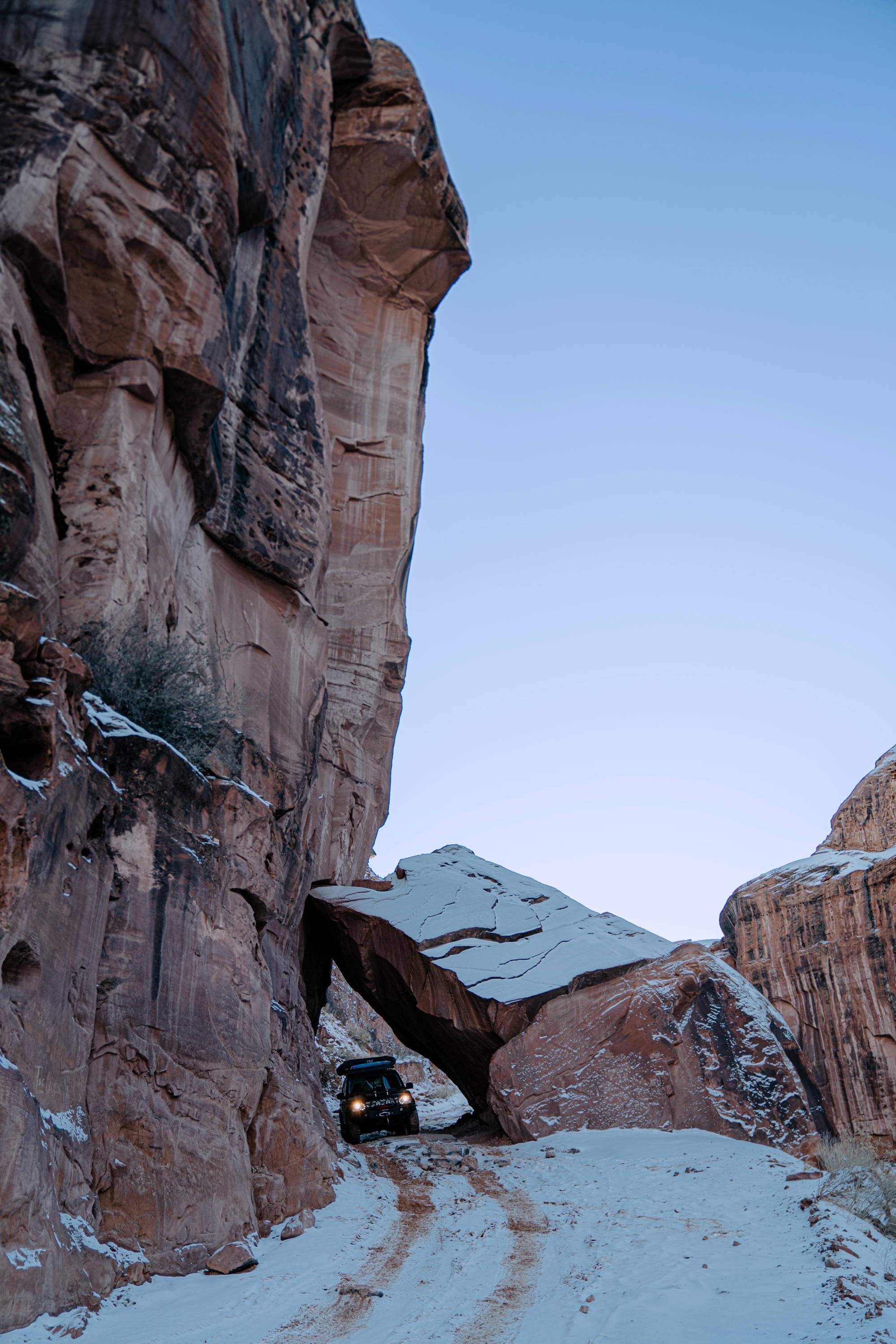 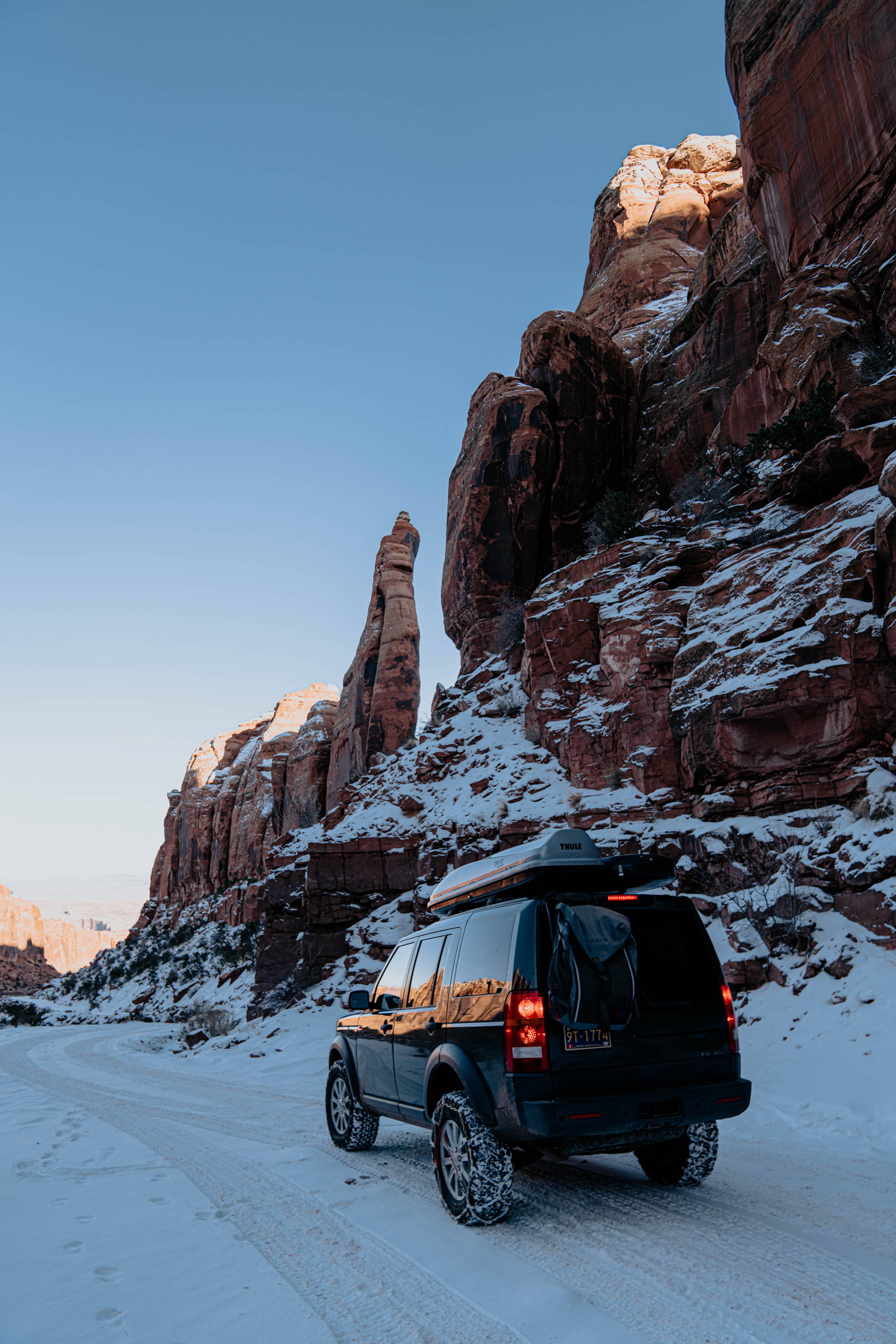 The slick gives way to gravel trails and a fast, dusty twister through an “upper canyon” roughly 500 feet above the Colorado River, surrounded by jagged cliffs jutting nearly 2,000 feet above. There are a few spurs from the main road that narrow into tight canyons - these would make for epic campsites in the spring.

We pushed on through the canyon to Thelma and Louise Point, slowly making our way around the horseshoe and snapping photos like the tourists that we are. Following the trail to the head of White Rim, we noticed it was still icy and becoming dark, so we decided to head back out and call it a night. Since it’s off season there’s nearly no one on the tail and we’re not stopping for photos so we’re able to get back out in a fraction of the time it took us to get in.

As the sun set in the desert, the temperature dropped rapidly. Rene captured some really cool photos before we headed to our AirBnB in Moab to warm up. 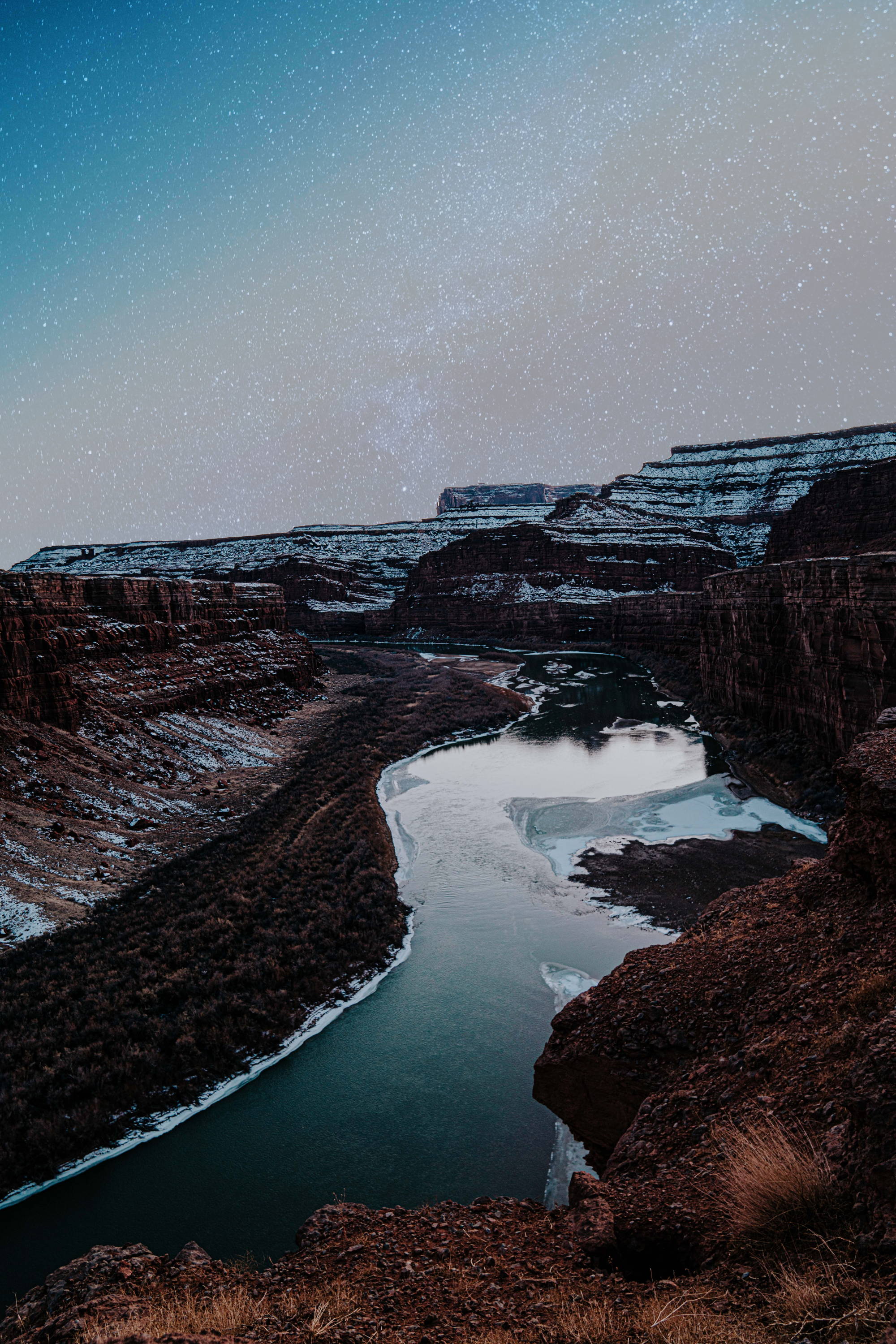 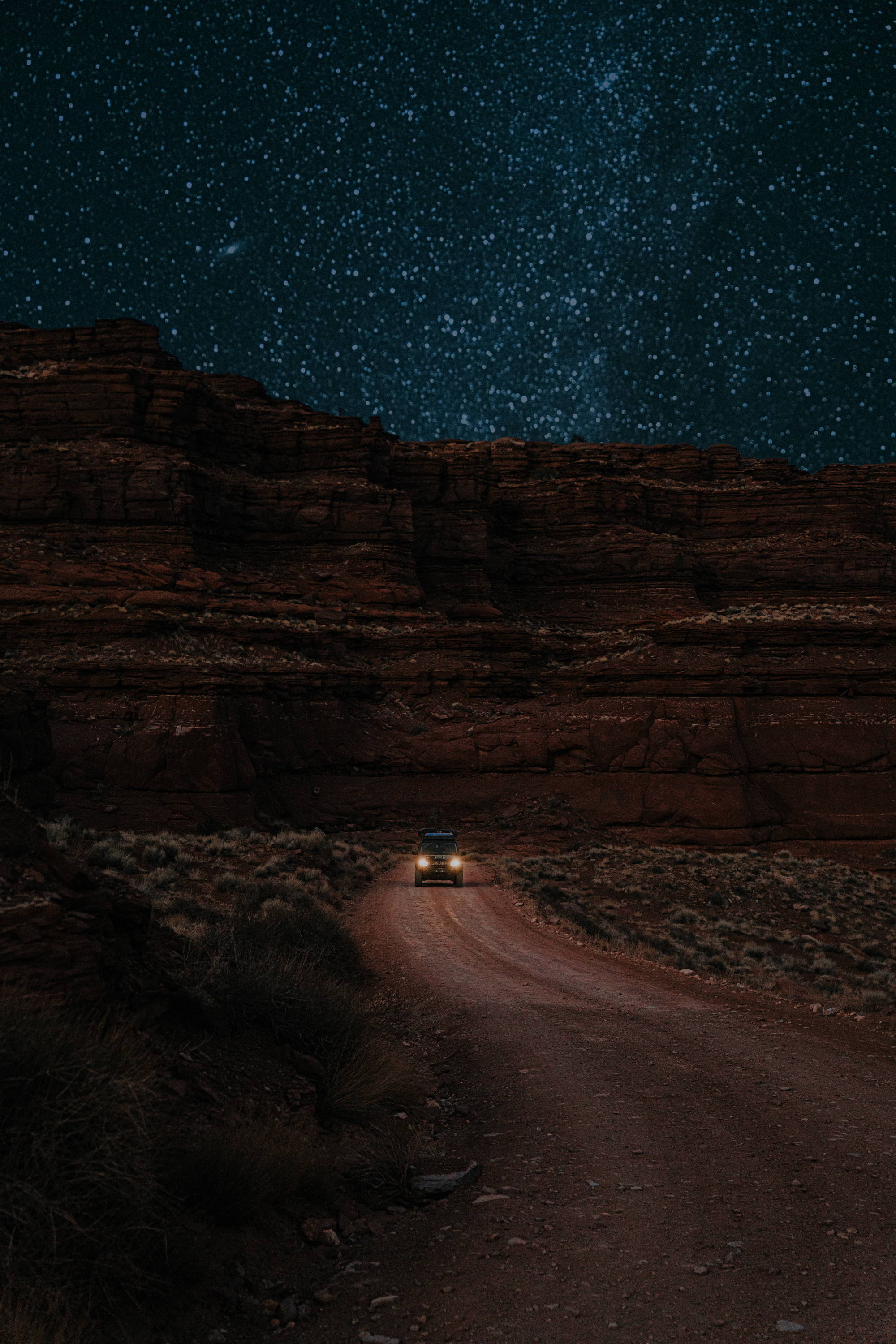 We wanted to get the full Moab experience and you can’t come to Moab without hitting some slickrock. After consulting the visitor center to ensure the trials were open we headed up to Fins N Things. Although the Discovery handled the trail well, some snow and ice made the slickrock a little bit sketchy on some northern slopes. So after completing most of Fins N Things we decided we had pushed our luck on icy slick rock long enough and should check out some more trails since this was our only full day in Moab so we headed for the Gemini Bridges OHV Trail to get some trial time in and see some sights.

The entry for this trail is east off the #191. The Gemini Bridges OHV Trail is not difficult, nor is it very steep - it’s a very gentle climb, but it lies at the base of a North-facing cliff, putting it into a shadow. The track was still covered in snow and ice, and at one point I found myself sliding backwards towards Thayer’s LR4. Fortunately, Thayer was watching and backed up quickly! After a few tries, and with enough momentum, I managed to reach the top.

We stopped to stretch our legs for a hike at Gemini Bridges. The parking area to the bridges is pretty clear but the tail was not. We found the edge of the canyon and climbed around on some of the rocks and took all the typical tourist photos. We’d been on the road driving non-stop for the last four and a half days, so it was nice to be out in the Sun walking around and getting a bit of exercise climbing on the rocks. Thayer had more guts than I did, and sat on the edge of the canyon ledge, hanging her feet over for a photo op.

On our way back to the trucks we found the actual rock arch bridges that you can walk across. After cruising around the plateau for an hour or so we decided to head for Long Canyon, as it would put us back down in the valley where we could loop back around towards town, and near the entrance to Potash Road, where we had explored the night before. Rene wanted to capture some astrophotography and thought the canyon walls would make for the perfect backdrop.

In good weather, Long Canyon is an easy descent. There is also a great photo opp located at a passage where a large rock leans up against the canyon wall, with just enough room to squeeze a vehicle through.

As we started down the trail, it was completely shadowed by the tall canyon, leaving the terrain snow-covered and rather slick. The trail is characterized by a slot canyon near the entrance with steep undulations and some tight switchbacks. We took turns driving from flat spot to flat spot, providing ample room between the vehicles in case one of us started to slide. It was a little bit nerve wracking as there were some areas where the rock wall cuts into the trail, creating a concave recess ahead. We had to steer around these areas, which had the potential to be dangerous if we slid into the recess. It would have been difficult to back out and traction wasn’t great. Fortunately, we made it through the slot canyon in one piece before arriving at a sketchy spot with a drop off to the left. At this point I decided to chain up. After passing through the tunnel, the trail hit direct sunlight and we were able to remove the chains and pick up the pace.

Contrary to its name, Long Canyon isn’t very long by trail standards but the ice had us going quite slow so once we arrived at the intersection of Long Canyon and Potash Road, we picked up the pace and bombed out to Shafer again for some dusk shots and astrophotography after dark. As the sun went down, the ground started to cool and the wind picked up, chilling us to the bone. Finishing up a great day of driving, we returned to our AirBnB for a well-deserved warm-up and pack-up before heading home the next morning. 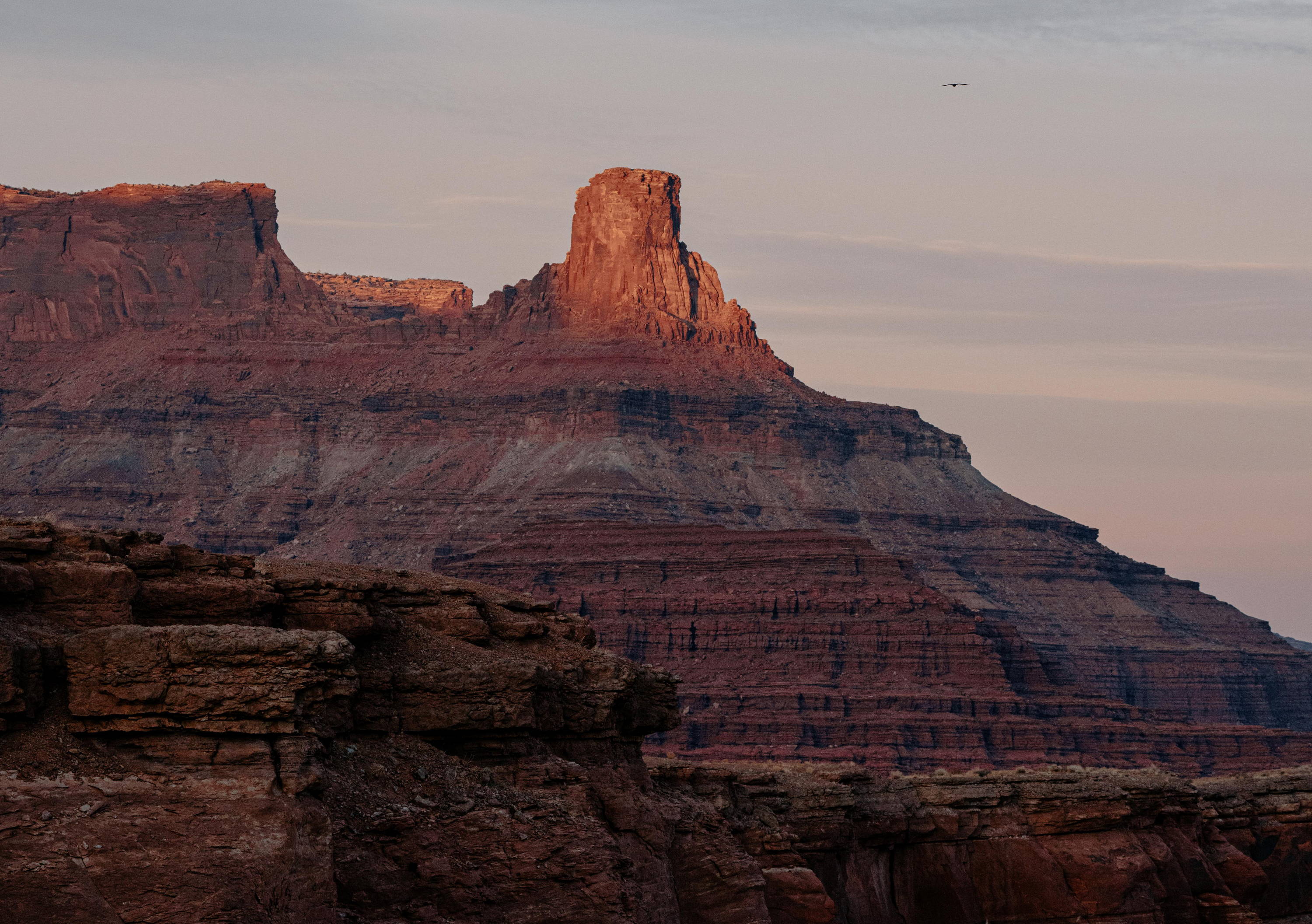 If you have the opportunity, definitely head to Moab.

There is so much to see and do! You could really spend an inordinate amount of time exploring the area. Arches National Park is very accessible and is a short distance from the highway, so if you only have time for one full day of exploring, you can pack a lot in. Even better? Go in the off-season and enjoy the solitude, scenery and something a little out of the ordinary.